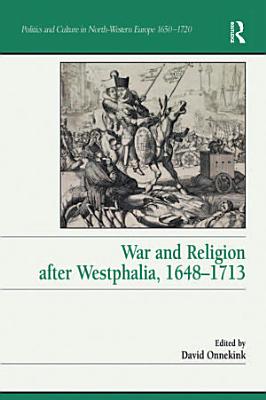 Many historians consider the Peace of Westphalia, which ended the Thirty Years' War in 1648, to mark a watershed in European international relations. It is generally agreed that Westphalia brought to an end more than a century of religious conflicts and marked the beginning of a new era in which secular power politics was the prime motivating factor in international relations and warfare. The purpose of this volume is to question this assumption and reconceptualise the relationship between war, foreign policy and religion during the period 1648 to 1713. Some of the contributions to the volume directly challenge the idea that religion ceased to play a role in war and foreign policy. Others confirm the traditional view that religion did not play a dominant role after 1648, but seek to re-evaluate its significance and thereby redefine religious influences on policy in this period. By exploring this issue from various perspectives, the volume offers a unique opportunity to reassess the influence of religion in international politics. It also yields deeper insights into concepts of secularisation, and complements the research of many social and cultural historians who have begun to challenge the idea of a decline in the influence of religion in domestic politics and society. By matching the relationship between conflict and religion with this scholarship a more nuanced appreciation of the European situation begins to emerge.