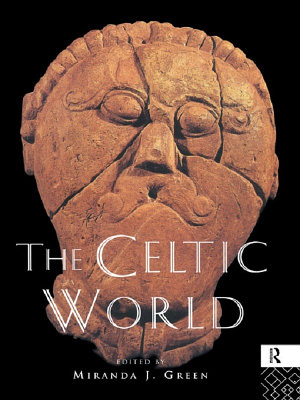 The Celtic World is a detailed and comprehensive study of the Celts from the first evidence of them in the archaeological and historical record to the early post-Roman period. The strength of this volume lies in its breadth - it looks at archaeology, language, literature, towns, warfare, rural life, art, religion and myth, trade and industry, political organisations, society and technology. The Celtic World draws together material from all over pagan Celtic Europe and includes contributions from British, European and American scholars. Much of the material is new research which is previously unpublished. The book addresses some important issues - Who were the ancient Celts? Can we speak of them as the first Europeans? In what form does the Celtic identity exist today and how does this relate to the ancient Celts? For anyone interested in the Celts, and for students and academics alike, The Celtic World will be a valuable resource and a fascinating read.

Authors: Miranda Green
Categories: Social Science
The Celtic World is a detailed and comprehensive study of the Celts from the first evidence of them in the archaeological and historical record to the early pos

Memory and Foresight in the Celtic World

Authors: Lorna G. Barrow
Categories: History
Memory and Foresight in the Celtic World delves deep into the experience of Celtic communities and individuals in the late medieval period through to the modern

Saints' Cults in the Celtic World

Authors: John Reuben Davies
Categories: History
Saints' cults flourished in the medieval world, and the phenomenon is examined here in a series of studies.

Authors: Harry Mountain
Categories: History
The book concentrates on the cultures that arose in Europe after the dispersal of the Aryan-speaking people from their homeland north of the Black Sea during BC

Prophecy, Fate and Memory in the Early Medieval Celtic World

Authors: Professor Jonathan Wooding
Categories: History
Prophecy, Fate and Memory in the Early and Medieval Celtic World brings together a collection of studies that closely explore aspects of culture and history of

The Bronze Age and the Celtic World

The Historical Atlas of the Celtic World