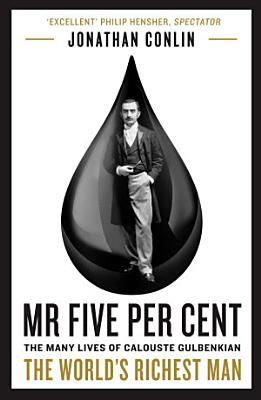 Winner of the BAC Wadsworth Prize for Business History 2020 When Calouste Gulbenkian died in 1955 at the age of 86, he was the richest man in the world, known as 'Mr Five Per Cent' for his personal share of Middle East oil. The son of a wealthy Armenian merchant in Istanbul, for half a century he brokered top-level oil deals, concealing his mysterious web of business interests and contacts within a labyrinth of Asian and European cartels, and convincing governments and oil barons alike of his impartiality as an 'honest broker'. Today his name is known principally through the Gulbenkian Foundation in Lisbon, to which his spectacular art collection and most of his vast wealth were bequeathed. Gulbenkian's private life was as labyrinthine as his business dealings. He insisted on the highest 'moral values', yet ruthlessly used his wife's charm as a hostess to further his career, and demanded complete obedience from his family, whom he monitored obsessively. As a young man he lived a champagne lifestyle, escorting actresses and showgirls, and in later life - on doctor's orders - he slept with a succession of discreetly provided young women. Meanwhile he built up a superb art collection which included Rembrandts and other treasures sold to him by Stalin from the Hermitage Museum. Published to mark the 150th anniversary of his birth, Mr Five Per Cent reveals Gulbenkian's complex and many-sided existence. Written with full access to the Gulbenkian Foundation's archives, this is the fascinating story of the man who more than anyone else helped shape the modern oil industry.

Authors: Jonathan Conlin
Categories: Biography & Autobiography
Winner of the BAC Wadsworth Prize for Business History 2020 When Calouste Gulbenkian died in 1955 at the age of 86, he was the richest man in the world, known a

Investigation of the Naval Defense Program: Hearings Before ...

Proceedings of the Parliament of South Australia

Investigation of Bureau of Internal Revenue