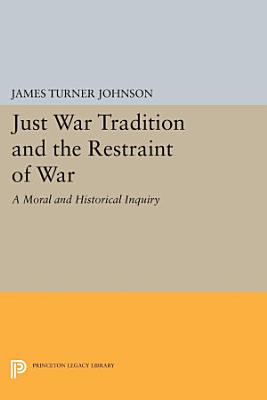 In this volume, a sequel to Ideology, Reason, and the Limitation of War, James Turner Johnson continues his reconstruction of the history of just war tradition by analyzing significant individual thinkers, concepts, and events that influenced its development from the mid-eighteenth century to the present. Originally published in 1981. The Princeton Legacy Library uses the latest print-on-demand technology to again make available previously out-of-print books from the distinguished backlist of Princeton University Press. These editions preserve the original texts of these important books while presenting them in durable paperback and hardcover editions. The goal of the Princeton Legacy Library is to vastly increase access to the rich scholarly heritage found in the thousands of books published by Princeton University Press since its founding in 1905.

Just War Tradition and the Restraint of War

Authors: Eric Patterson
Categories:
Essays on the work and thought of James Turner Johnson with respect to the history and ideas of the just war tradition

Authors: Nicholas Rengger
Categories: History
Argues the just war tradition, rather than being a restraint on war, has expanded its scope, and criticises this trend.

Authors: C. O'Driscoll
Categories: Political Science
This book examines the manner by which the just war tradition has been invoked, engaged and developed in the context of the war on terror, paying particular att

Authors: Paola Pugliatti
Categories: Literary Criticism
Brought to light in this study is a connection between the treatment of war in Shakespeare's plays and the issue of the 'just war', which loomed large both in r

When War Is Unjust, Second Edition

Authors: John Howard Yoder
Categories: Religion
Can a war really be considered justÓ? If so, which wars, and under what circumstances? If not, why not? When War is Unjust provides a systematic exploration of