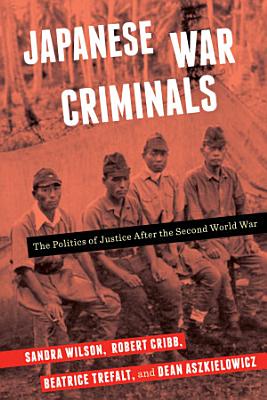 Beginning in late 1945, the United States, Britain, China, Australia, France, the Netherlands, and later the Philippines, the Soviet Union, and the People's Republic of China convened national courts to prosecute Japanese military personnel for war crimes. The defendants included ethnic Koreans and Taiwanese who had served with the armed forces as Japanese subjects. In Tokyo, the International Military Tribunal for the Far East tried Japanese leaders. While the fairness of these trials has been a focus for decades, Japanese War Criminals instead argues that the most important issues arose outside the courtroom. What was the legal basis for identifying and detaining subjects, determining who should be prosecuted, collecting evidence, and granting clemency after conviction? The answers to these questions helped set the norms for transitional justice in the postwar era and today contribute to strategies for addressing problematic areas of international law. Examining the complex moral, ethical, legal, and political issues surrounding the Allied prosecution project, from the first investigations during the war to the final release of prisoners in 1958, Japanese War Criminals shows how a simple effort to punish the guilty evolved into a multidimensional struggle that muddied the assignment of criminal responsibility for war crimes. Over time, indignation in Japan over Allied military actions, particularly the deployment of the atomic bombs, eclipsed anger over Japanese atrocities, and, among the Western powers, new Cold War imperatives took hold. This book makes a unique contribution to our understanding of the construction of the postwar international order in Asia and to our comprehension of the difficulties of implementing transitional justice.

Men to Devils, Devils to Men

Authors: Barak Kushner
Categories: History
The Japanese Army committed numerous atrocities during its pitiless campaigns in China from 1931 to 1945. Focusing on the trials of Japanese war criminals, Bara

A History of War Crimes Trials in Post 1945 Asia-Pacific

The Knights of Bushido

Authors: Jing Bao Nie
Categories: History
Prior to and during the Second World War, the Japanese Army established programs of biological warfare throughout China and elsewhere. In these “factories of

The Criminal Conspiracy in the Japanese War Crimes Trials