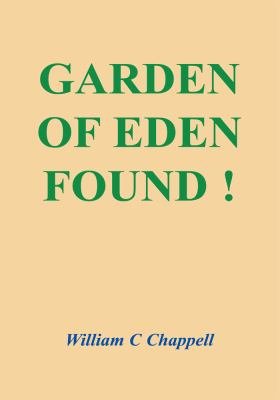 This book entitled, Garden of Eden Found, is divided into three almost equal parts. Part I of the book is exactly what the title says. It reveals and explains the exact geographical location of the ancient site of the Garden of Eden. This is an absolutely new and a previously undiscovered site. People suppose that we must yet wait on a prophet of God to reveal its location, but this book explains that God through the prophet Moses said everything he could to explain the location of the Garden of Eden in the second chapter of Genesis. It is just that the names of the lands and rivers have changed. The original thing in this work, however, is that the ancient site of the Garden of Eden was located upon the North American continent. Note that according to Genesis 1:10 each land was called earth. Thus, it could have been on any continent. There has never been one fact of evidence to show that the Garden of Eden was located in the Middle East anyway. This has only been a supposition of the so-called learned; even those who write the text books; and most of whom do not believe in God or in revelation. The author has simply put together the Genesis account of Eden with the latter-day revelations concerning Adam-ondi-Ahman in America. Part II of this book reveals the ultimate meaning of the six days and the six nights and Sabbath of the creation account in Genesis chapter one. No one has ever discovered nor understood their ultimate meaning before this work. The author submits that this concept is the greatest concept that can be conceived by the mind of man concerning ultimate reality. This concept ties together the law of eternal progression, the order of the universes of the cosmos, and the days and nights of creation as one and the same thing. So the author begins Part II of his book with the following paragraph. If I were a scientist and was speaking before my other colleagues, then, I would name my address, "The Number and Order of the Universes of the Cosmos." If I was a philosopher and was presenting this topic before my fellow philosophers, I would entitle my presentation, "The Law of Eternal Progression to Ultimate Continuum." But if I happened to be a theologian, and was preaching a sermon to my parishioners, I would call my message, "The Meaning of the Six Days and Six Nights and a Sabbath of Creation." This is because these three subjects concern the same ultimate reality. The first is scientific, the second is philosophical, and the third is religious. Often the terms for universe and the cosmos are used interchangeably. Actually, this is the concept of mankind at the present time. Most people, including scientists, the philosophers, and the theologians, consider that the universe is the cosmos and that the cosmos is the universe. However, this is simply not the true case of the matter, for the cosmos is the sum total of the series of the twelve universes of the cosmos. However, would anyone have ever entertained the idea that the answer is to be found in the first chapter of the Book of Genesis in the Bible? Who would have thought that God had hidden it in the simple account of the six days and the six nights and Sabbath of creation? I will attempt to show, in plainness and simplicity, that this is the true interpretation. SPAN style="mso-bidi-font-size: 11.0pt"Part III of this book explains the historic meaning of the symbolism in the Book of Revelation. The new truth to understand is that they represent only natural things and historical events of the past two-thousand years of Christian history. There are three general principles that we must accept in order to understand the symbolism of t

Authors: William C. Chappell
Categories: Philosophy
This book entitled, Garden of Eden Found, is divided into three almost equal parts. Part I of the book is exactly what the title says. It reveals and explains t

Where Is the ‘Garden of Eden’ According to the Bible?

Authors: Paty
Categories: Religion
The most important reason for knowing the location of the Garden of Eden is to study certain things that originate in the spirit realm and pose arguments and di

The Garden of Eden; Or, Paradise Lost and Found

Authors: Victoria C Woodhull
Categories:
The Garden of Eden was first published in 1875. This version is a 58-page facsimile of the version in The Human Body The Temple of God published in 1890 London.

The Storyteller and the Garden of Eden

Authors: Ellen Ann Robbins
Categories: Religion
The story of the Garden of Eden is one of the most familiar in the Bible. But if we read it without preconceptions, we discover a narrative as its original audi

The Original Garden of Eden Discovered and the Final Solution of the Mystery of the Woman, the Tree and the Serpent

Authors: William F. Warren
Categories: Fiction
The Cradle of the Human Race at the North Pole is a book by William Fairfield Warren, first published in 1885. In this book, Warren puts forth his belief that A

The Ancient Portals of Heaven

Authors: David Herzog
Categories: Religion
What are the ancient pathways that opened up the supernatural for the ancients like Moses, Elijah and Solomon. What ancient wisdom did the wisest man in the wor

Authors: William C. Chappell
Categories: Body, Mind & Spirit
WHERE THE RIVERS MEET is a novel of friendship and spiritual quest. Twenty-two year old David Blake, having left his home on Maryland's Eastern Shore to live in

Authors: Anke Finger
Categories: Social Science
The analyses of German and Brazilian cultures found in this book offer a much-needed rethinking of the intercultural paradigm for the humanities and literary an

Authors: Sunil Kumar Sarker
Categories:
There Is No Poet In English Literature Like Milton : So Firm In Religious Conviction, So Fierce In Politics, So High In Poetic Flight, So Grand In Style, So Gre