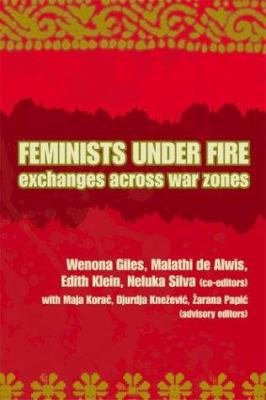 Feminists Under Fire is about women living and working in conflict zones. Focusing on the civil wars in Sri Lanka and the former Yugoslavia, diverse authors face the problems of nationalism, ethnic conflict, and militarized violence. They explore commonalities and differences between the two regions, and consequences for women, their societies, and feminist politics.Women are neither simply victimized nor empowered by war; their experiences are more complicated. While they suffer from war-related violence and upheaval, some women living in traditional societies find that war releases them from constricting hierarchies. Others find it reinforces conventional gender roles. This ambivalence needs to be examined and understood.In addition to such concerns the collection addresses issues of domestic violence, rape, intermarriage, victimization, feminist organizing and anti-war activism, women's self-help organization, and political resistance.This vibrant collection emerges from The Women in Conflict Zones Network, an international collaboration of activists and scholars.

Authors: Robin Riley
Categories: Social Science
Women across the globe are being dramatically affected by war as currently waged by the USA. But there has been little public space for dialogue about the compl

Authors: Annick T. R. Wibben
Categories: Political Science
Researching War provides a unique overview of varied feminist contributions to the study of war through case studies from around the world. Written by well-resp

From Where We Stand

The Women and War Reader

Authors: Lois Ann Lorentzen
Categories: History
Women play many roles during wartime. This compelling study brings together the work of foremost scholars on women and war to address questions of ethnicity, wo

The War Against Boys

Authors: Christina Hoff Sommers
Categories: Education
An updated and revised edition of the controversial classic--now more relevant than ever--argues that boys are the ones languishing socially and academically, r

Authors: Johanna Alberti
Categories: Feminism
The author explores the experience of fourteen women from 1914 to 1928, the year when the enfranchisement of women in Britain was completed. These women were ac